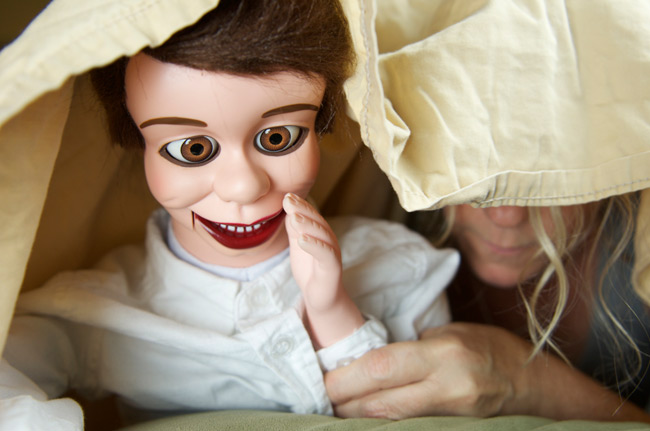 Easy Pieces is an ongoing series of live and recorded performance works featuring the artist, T. Foley,  and her straight man–a ventriloquist dummy named Hector. Works presented for the 2011 Pittsburgh Biennial at the Andy Warhol Museum include:

On Display (video)
Hector gives voice to otherwise disembodied Internet confessionals in monologues based on thousands of published men seeking women ads on craigslist. Performing the scenarios in mundane personal settings featured in posters’ photographs, the artist animates a range of masculine display-attempts that vie to attract the attention of women online.

The Dummy Is Present
During this live performance, a re-interpretation of Marina Abramović’s The Artist Is Present, 2010–random visitors to the Web site Chatroulette* will be encouraged to sit silently (or not) across from Hector the Dummy and the audience at the Warhol, for a duration of their choosing.

*Chatroulette is a website that pairs strangers from around the world together for webcam-based conversations. Visitors to the website begin an online chat (video, audio and text) with another visitor who is chosen at random. At any point, either user may leave the current chat by initiating another random connection.