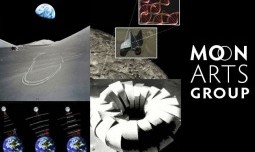 For three days in May of 2013, practicing space artists met and exhibited at the 4th International Space Arts Workshop (ISAW4) at NASA Research Park in Mountain View, California. The event was chaired by Lowry Burgess, Professor of Art and former Dean of the College of Fine Arts at Carnegie Mellon University.

ISAW4 featured presentations and exhibitions by the Moon Arts Project, which Burgess initiated in 2011, as well as many other artists and scholars whose work is inspired by the cultural framework of humanity in space.

The purpose of the workshop was to disclose the extraordinary challenges to the arts “at the dawn of humanity’s movement into the solar system,” and to foster international collaboration within the space arts community.

ISAW4 was supported by a microgrant from the Frank-Ratchye Fund for Art @ the Frontier (FRFAF)— an endowment founded to encourage the creation of innovative artworks by the faculty, students and staff of Carnegie Mellon University. With this fund, the STUDIO seeks to develop a cache of groundbreaking projects created at CMU — works that can be described as “thinking at the edges” of the intersection of disciplines.

Lowry Burgess is a Professor of Art and former Dean of the College of Fine Arts at Carnegie Mellon University.