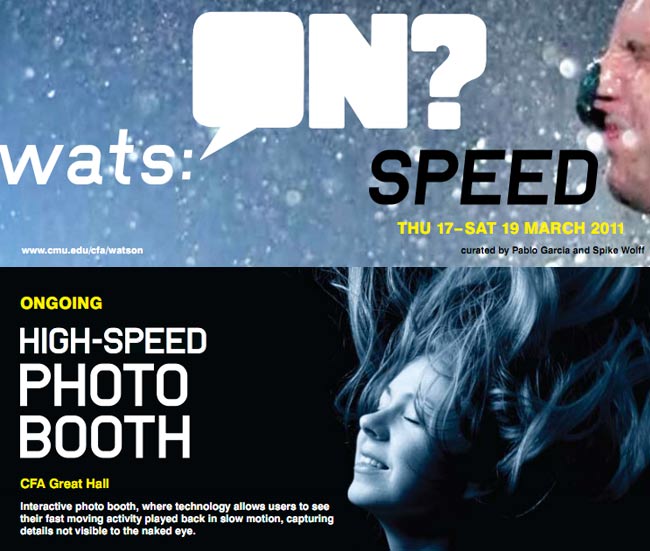 Notions of speed in contemporary culture are often tied to technology and its impacts on everyday life.

All events are free and at Carnegie Mellon University, specific auditoriums vary by event.

Sat 19 March
FILM FESTIVAL: Short Films and a presentation by TelcoSystems
ACH/ Studio for Creative Inquiry, 7:30pm
A film double feature pushing the limits and extremes of our perception.

Followed by a presentation by Dutch new-media art group TELCOSYSTEMS.
Telcosystems research the relation between the behavior of programmed numerical logic and the human perception of this behavior. Their immersive audiovisual installations aim at an integration of human expression and programmed machine behavior exploring the limits of the human sensory apparatus.

History of the Festival

The Jill Watson Festival Across the Arts (wats:ON?) was created to honor the life of Jill Watson, whose interest in the arts inspired others through her work and her teaching. The festival celebrates Jill’s commitment to an interdisciplinary philosophy as an artist and celebrates her accomplishments and reputation as an architect. Jill Watson was a Carnegie Mellon University alumna, adjunct faculty member in the School of Architecture and
acclaimed Pittsburgh architect who died in the TWA Flight 800 plane crash on July 17, 1996. The 2010 wats:ON returned the festival to its original form as an interdisciplinary series of events, made possible by the generous support of the JILL WATSON FAMILY FOUNDATION.