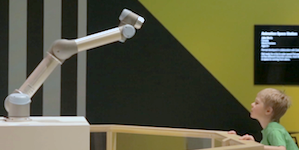 Mimic from Design I/O on Vimeo.

Design I/O‘s Mimic is a playful interactive installation that allows visitors to engage in a dialogue with a robot arm through gesture. The robot arm tracks people moving in the space, building up individual impressions of each person and reacting to their actions accordingly. These impressions are broken down into different robot feelings: trust, interest, and curiosity which in turn affect how cautious or playful the robot arm is in its responses. Mimic can interact with many people simultaneously changing its behavior and playfulness based on its feelings towards each person.

Commissioned by TIFF ( Toronto International Film Festival ). Mimic was developed through an artist residency at the Frank-Ratchye STUDIO for Creative Inquiry. This project was developed with openFrameworks, and makes use of the ofxRobotArm and ofxURDriver libraries for robot control developed at the STUDIO by Madeline Gannon and Dan Moore. 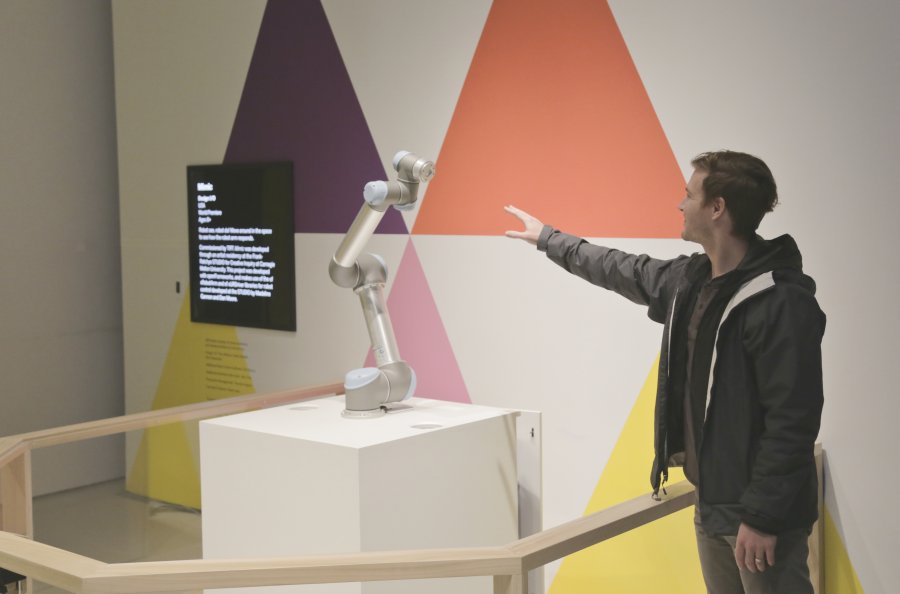 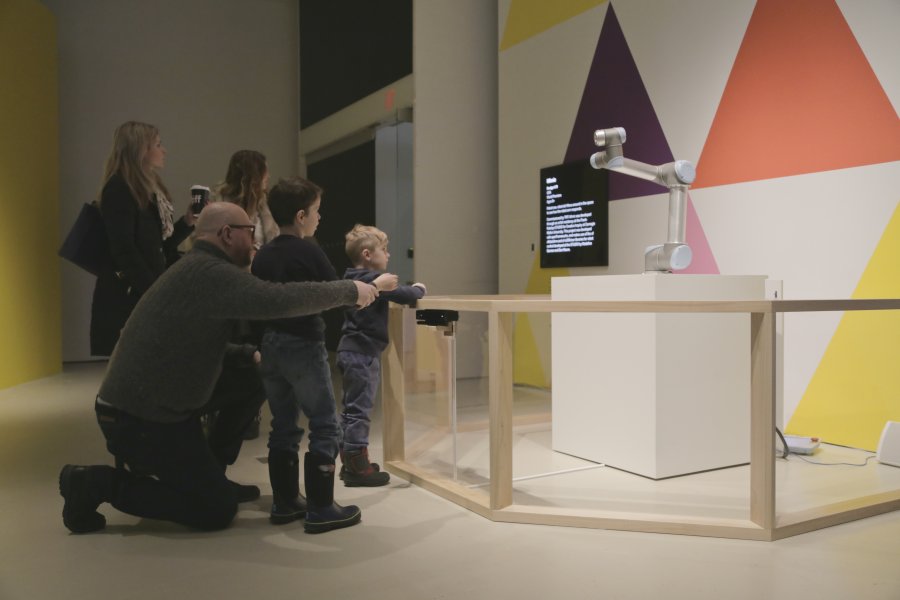 Design I/O is a creative studio specializing in the design and development of cutting edge, immersive, interactive installations and experimental storytelling. They develop installations for events, galleries, museums, exhibitions, and public spaces to create interactive engagement with the public. Design I/O seeks to push the boundaries in the intersection between design and technology.

THEODORE WATSON
Partner / Creative Director Theo Watson is an artist, designer and experimenter whose work is born out of the curiosity and excitement of designing experiences that come alive and invite people to play. Theodore’s work ranges from creating new tools for artistic expression, experimental musical systems, to immersive, interactive environments with full-body interaction. His recent work includes The Eyewriter, an eye controlled drawing tool, Graffiti Research Lab’s Laser Tag, laser graffiti system and Funky Forest, an immersive interactive ecosystem for young children. Theodore works together with Zachary Lieberman and Arturo Castro on openFrameworks, which is an open source library for writing creative code in C++.

EMILY GOBEILLE
Partner / Creative Director Emily Gobeille is an artist and award-winning designer who specializes in merging technology and design to create rich immersive design experiences. Working in concept development, visual design, interaction design and creative direction, her experience over the past ten years spans many disciplines, including web, print, motion graphics, wireless platforms and installations. Emily’s unbound energy and affinity for telling stories lends to her playful approach to projects. With an emphasis on meaningful interaction and systems built to support open play and discovery, her work creates a sense of wonder and delight.