Blue LED by Imin Yeh is a 20 foot long shelf lined with 54 paper sculptures that are each individually programmed to blink a single letter in international morse code. Each of individual sculptures are artist facsimiles, made entirely out of paper, of the world’s very first LED that glowed blue. This installation of Blue LED was exhibited at Making Innovation: Artists, Engineers, and the Sarnoff Collection at the College of New Jersey (January 31, 2018-April 8, 2018). The quote that the sculpture blinks in morse code is a famous quote by RCA Chariman, David Sarnoff. It says:

The first Blue LED was invented in 1972 by a young materials researcher at RCA named Herbert Paul Maruska. By 1974, RCA internally collapsed, cutting all further research on the blue LED. It would not be until the late 1980s and early 1990s when three Japanese Engineers, Isamu Akasaki, Hiroshi Amano, and Shuji Nakamura. Their developments would earn them a Nobel Prize in Physics in 2014. 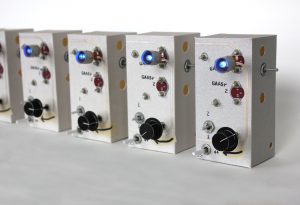