The STUDIO is thrilled to announce the first Maddy Varner Mastication Grant for Time (and/or) Teeth Based Works! Inspired by the work of graduating School of Art senior Lumi Barron, alumna Maddy Varner’s generous gift supports a $500 award for “work that chews the cud”, such as art about chewing, or creative inquiry which takes a long time to realize. 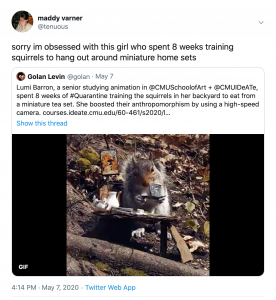 Barron, the first recipient of the award, created her work Sciuridaes for an assignment in Prof. Golan Levin and Prof. Nica Ross’s Experimental Capture course. Named after the scientific name for squirrels, Sciuridaes features recordings of squirrels eating at tiny dining scenes; to boost the anthropomorphism of the squirrels, Barron experimented with the STUDIO’s Edgertronic high-speed camera. Her project has been featured on CNN, Finnish television and many online blogs. You can follow her ongoing progress on the project’s Instagram account, sciuriouser_and_sciuriouser.

Maddy Varner is an alumna of the School of Art (BFA 2017). During her time at CMU, Maddy worked extensively at the STUDIO, having participated as a founding member in the cyberfeminist collective Deep Lab, and made projects through the STUDIO as a Virtual Research Fellow in the Free Art and Technology (F.A.T.) Lab artist group.