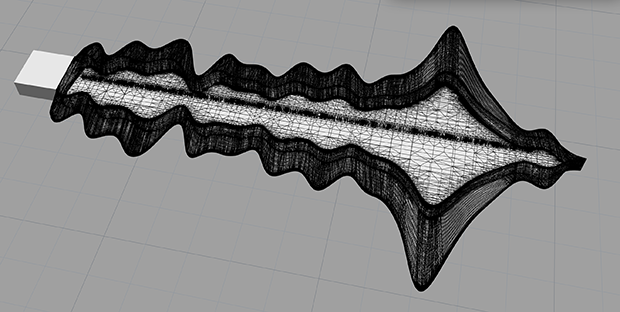 In Fighting {S}Words, Anna von Reden generates physical blades from the audio waveforms of battle speeches. The project explores the power of words, whether as weapons or tools of encouragement, praise, exultation, or despair.

The blade depicted below is King Theoden’s monologue (delivered by Bernard Hill) in The Lord of the Rings: The Two Towers, immediately before Helm’s Deep. 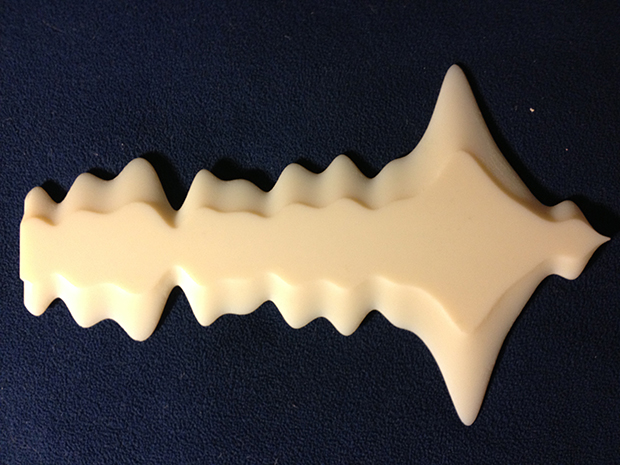 A second blade was created from the “Once More Unto the Breach” monologue from Shakespeare’s Henry V, recited by Tom Hiddleston.

Fighting {S}Words was supported by a microgrant from the Frank-Ratchye Fund for Art @ the Frontier (FRFAF)— an endowment founded to encourage the creation of innovative artworks by the faculty, students and staff of Carnegie Mellon University. With this fund, the STUDIO seeks to develop a cache of groundbreaking projects created at CMU — works that can be described as “thinking at the edges” of the intersection of disciplines.

Anna von Reden is currently a graduate student in the Master of Communication Planning & Information Design program in the CMU School of Design. Fighting {S}Words was developed in Processing and made use of the digital fabrication facilities in the CMU Collaborative Machining Center. More information about Anna’s project can be found at http://golancourses.net/2013/projects/fighting-swords/.