Yang Cai directed many inquiries while he was a fellow (2000-2004), researching and designing creative activities in the area of art and scientific visualization. Below are brief descriptions of some of his efforts at the STUDIO:

The Insight project aimed to model artistic expressions in a digital form. Cai proposed to create a computer/robot that could learn to express things visually like artists. Research issues include the language and perception of artists, and the representations of those heuristics on a computer. The project was broken down into two tasks, creating a coloring system that could detect the color scheme of any painting, and building a visual structure perception system that could help the computer to generate a better pictorial composition based on the color scheme data.

The MobileMedia project aimed to build a wireless video stream platform that can be used for transit monitoring. The key component of this system was the art-making toolkit that enabled users to receive or send mobile media content that fit for the mobile devices. The functions include: 1) content-on-demand video and audio streams for mobile users around the “Hot Spots”, where the wireless hubs were installed. Five hot spots in Pittsburgh were proposed: Carnegie Library on Forbes, Carnegie Museum of Natural History, Starbucks Coffee Shop, CMU University Center and the bus stop at Forbes Avenue. When users are close to any hot spot, their mobile devices would be able to interact with the content on the Internet that is related to their location. 2) The ability to receive multimedia stream from the hot spots, but also actively uploads artwork or information to them. For example, users would be able to take a picture of an interesting scene and send it to the public web site to share with the community. The art-making toolkit would be able to stitch images together and present them in an artistic way, such as photo-mosaic or photo-landscape, etc. The collection of artworks would be a feature attraction of local communities, either exhibited online or offline. The target with this project was to establish a new model or mobile creativity that enabled two-way communication to the local community. 3) In addition, the system is also designed to include local visually impaired users. For example, a blind user can use the wearable computer to learn the street map and local events. 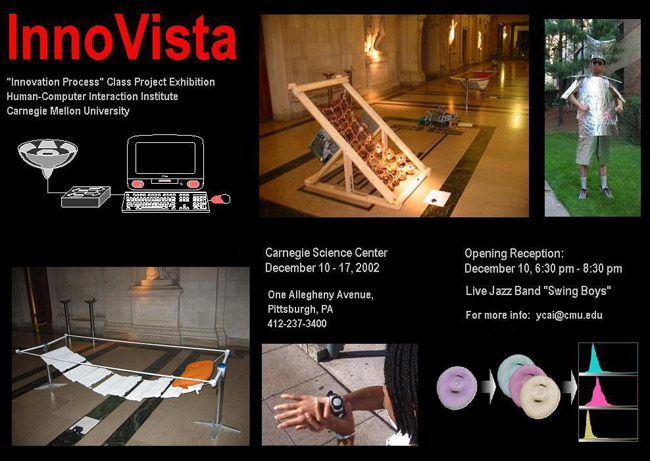