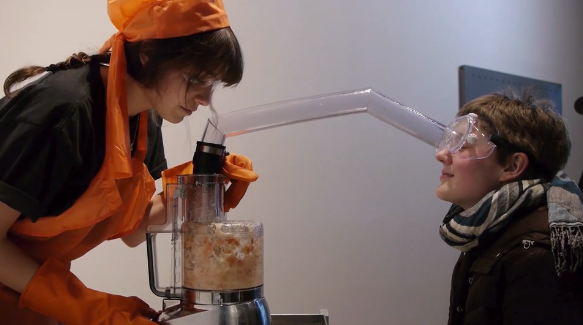 The Lachrymator by Isla Hansen is a performative installation that takes its name from the irritant produced by the mechanical action of cutting onions. When the sulfuric vapors of propanethial S-oxide come into contact with the human eye, they trigger the lachrymal glands, which produce tears. Human lachrymation follows the onion’s lachrymation, resulting in what could be considered a physiological empathetic response.

The Lachrymator: Origin Story from Isla Hansen on Vimeo.

The Lachrymator compares the emotional power of mediated imagery to the reflective chemical defenses of organisms. The installation recreates the narrative structure of a dramatic film by means of a process of food preparation, drawing parallels between the two systems of mediation – narrative cinema and industrial food processing. Taking the onion as protagonist, the piece moves this character and its audience through a simulated industrial environment, slowly revealing the hero’s story “from farm to table.”