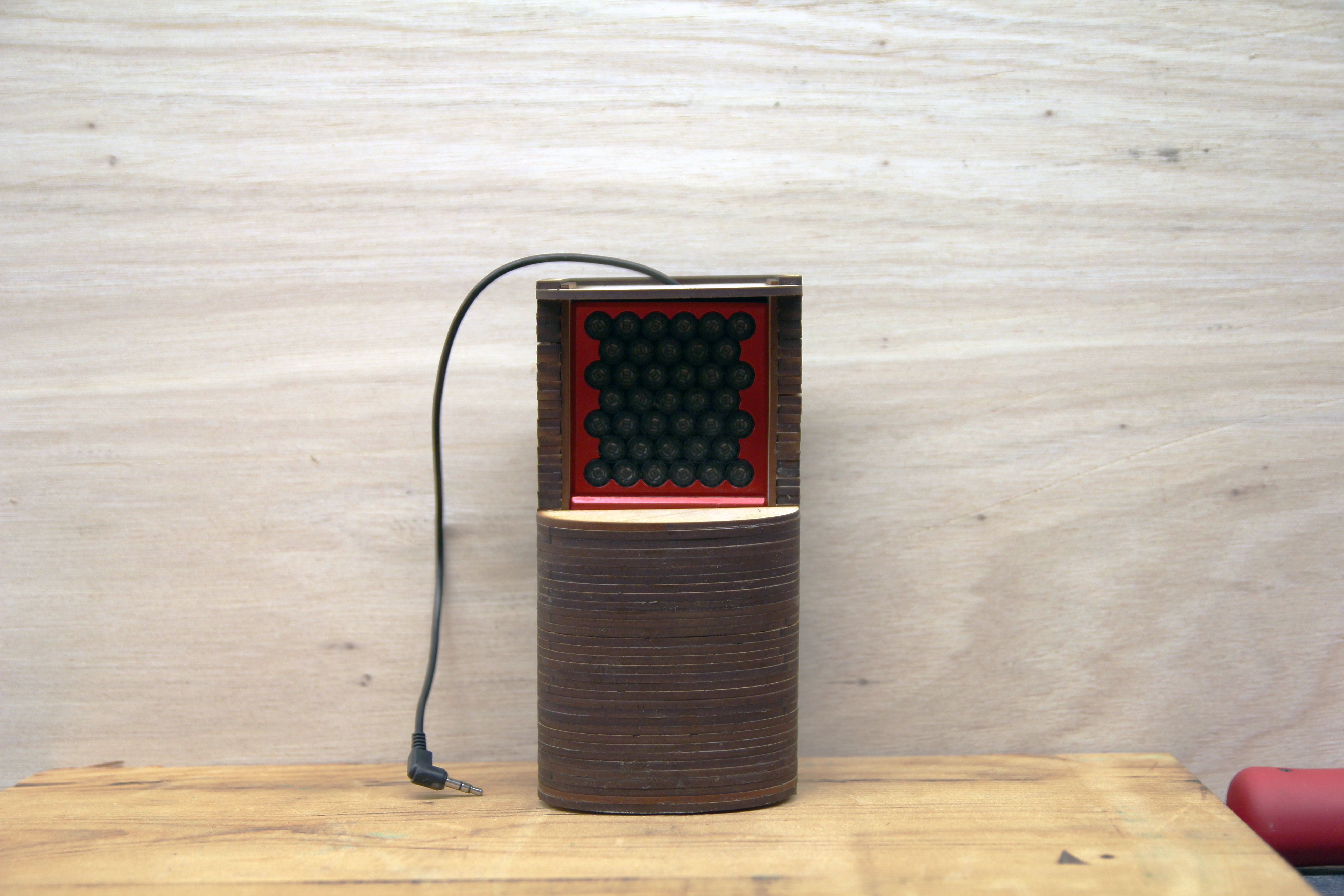 David Gordon’s device, the Gastromancer, exists at the cutting edge of humanity’s increasingly effective practice of sensory deception. Available as an attachment to any smart phone or media player device, the Gastromancer gives users portable and intuitive means of creating sound where source is absent. The nature of the device is better grasped through the lens of Ventriloquism, the most ancient form of sound projection. The practice was known as Gastromancy, which consisted of interpreting growling stomach noises as messages from the dead. 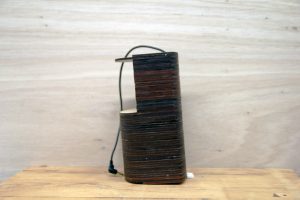 The ubiquity of synthesized audio in recent decades has trained us to think of audio in abstract terms. Our perception of sound and space is much harder to manipulate as a result. The skeptical viewer is quick to identify speakers in their environment. However, the emerging technology of directional sound offers new opportunities for fooling one’s perception. While research toward directional sound was underway as early as the 1960s, a cheap and effective method remained elusive until the 1990s. In 1997, inventor Elwood “Woody” Norris filed for US patent CA 2261108 C, titled “Acoustic heterodyne device and method”. Heterodyne refers to the phenomena that causes ultrasonic waves to generate lower frequency vibrations in the surrounding medium. Using this phenomena, a beam of ultrasonic waves outside of the range of human perception can be shot a significant distance before dissipating into perceptible frequencies. This masks the source of said frequencies, which seem to issue forth from wherever the beam is directed.

Gordon got to experience this phenomenon first hand when, in 2004, Woody Norris came to his 4th grade classroom to show them his newest model of parametric speaker. He made the sound of a rushing river come from Gordon’s stomach, among various other astonishing tricks. Since then, Gordon has been waiting for the opportunity to experiment with his speakers . At the time, parametric speakers were only commercially available to large-scale buyers, such as shopping outlets and big-time advertising companies. In March 2012, Richard Haberkern launched a Kickstarter campaign for an “open source, hackable parametric speaker” targeted specifically for individual purchase. After receiving over twice his stated funding goal, he created the website soundlazer.com, which offers palm sized modules for relatively inexpensive prices. However, these modules still do not offer a satisfactory degree of portability and intuitiveness. The Soundlazer speaker requires both a 12V power source and an auxiliary cord connection to an external sound device. In order to generate any sound at all, the speaker must be tethered to a power source and an additional media device.

Gordon decided to take the final steps to provide a truly portable and intuitive parametric sound generator. The result is the Gastromancer, named after the original tricksters of ancient Greece. The Gastromancer is essentially an augmented Soundlazer module. The 12V power is routed to a 12 volt rechargeable battery attached to the back of the module, eliminating dependence on a power outlet. The module and battery are encased within a laser-cut shell which can be held in one hand. This shell completely covers the Soundlazer and the battery, only leaving the projection array exposed. The auxiliary and battery recharge cords are also exposed. The auxiliary cord can easily connect an external device to the Soundlazer as-is. However, to be truly portable, the device’s functionality should be encapsulated within a singular form which can be held with one hand. Therefore, the shell’s rear is outfitted with Velcro, which can easily hold a phone. The result is a portable, albeit somewhat clunky, sound projection module which can be easily used, recharged, and concealed.

Gastromancer was created with support from a microgrant from the Frank-Ratchye Fund for Art @ the Frontier (FRFAF) — an endowment founded to encourage the creation of innovative artworks by the faculty, students and staff of Carnegie Mellon University. With this fund, the STUDIO seeks to develop a cache of groundbreaking projects created at CMU — works that can be described as “thinking at the edges” of the intersection of disciplines.