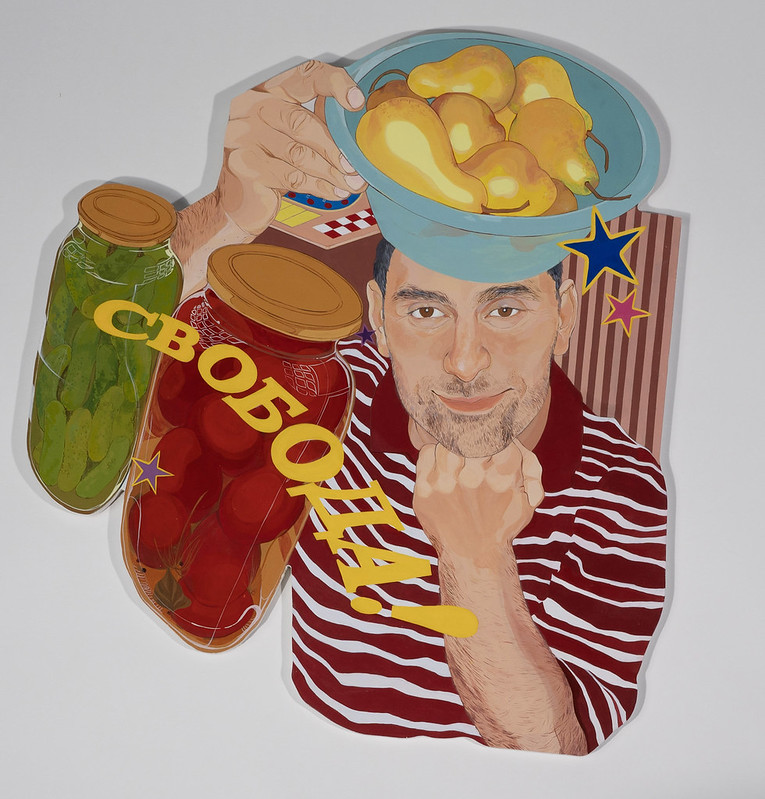 Ester Petukhova, an undergraduate School of Art student, began the series “R(U.S.)sia Online” in October 2021 as an elaboration on her work on displacement, post-soviet cultural belonging, and digital culture. Petukhova explains, “as someone who fled in 2001 from Vologda, Russia, I had turned to the digital then after to better understand the nation and livelihood I had been displaced from.”

Petukhova used a CNC router to create sculptural foundations for her works drawn from images derived from flat digital screens. The expanded dimension creates a new relationship for the viewer, and in the weeks following the February 2022 Russian invasion of Ukraine, the painting “Evidence of Survival: Slovyansk, Ukraine. (A Portrait of My Uncle Who is Alive and Free)”, had suddenly become a portal—for what felt like the entire world— to interject itself into the sanctuary of my studio. The portrait’s subject is Petukhova’s uncle who lived in Eastern Ukraine and was faced with the complicated decision of having to flee with his family of four children. They fled on March 9th of 2022. 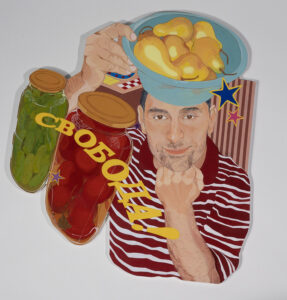 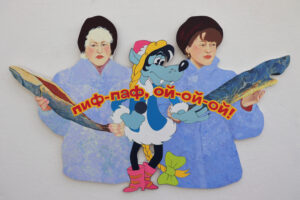 For “Militant Mink” Ester This is a passage in a popular Russian children’s hymn about a rabbit who goes into the woods and is hit by a hunter—but fakes his death to receive gifts and care from his surrounding peers. (Original Hymn which can be translated)
https://www.maminpapin.ru/detskie-schitalki/raz-dva-tri-chetire-pyat-vishel-zaiechik-pogulyat.html
The character in the middle is from a sensational soviet cartoon called “Ну Погоди!” (Just You Wait!) that is something akin to Tom and Jerry, except the show features Wolf and Rabbit as its main characters. The particular moment in which the still of Wolf is cut from, is an episode about the Eastern Orthodox Christmas Holiday. Wolf, dressed in drag as Snegurachka (the Snow Princess) strikes up a karaoke duo with Rabbit (who is dressed as Saint Nicholas) in an attempt to lure Rabbit into thinking they are friends. This of course, results in a wild chase between the two characters.
The image of the two women used in the painting was sourced from a soviet photographic archive and can be accessed here: https://www.businessinsider.in/stock-market/53-photos-of-russias-decade-after-the-collapse-of-the-soviet-union/slidelist/57621408.cms#slideid=57621403

Petukhova continues to work through the assortment of images collected as part of this creative and meditative research. She describes the research process paratactically, discovering new histories and complications while integrating these images from a digital world into the physical.

This project was made possible with support of microgrant#2022-011 from the Frank Ratchye Fund for Art @ the Frontier.