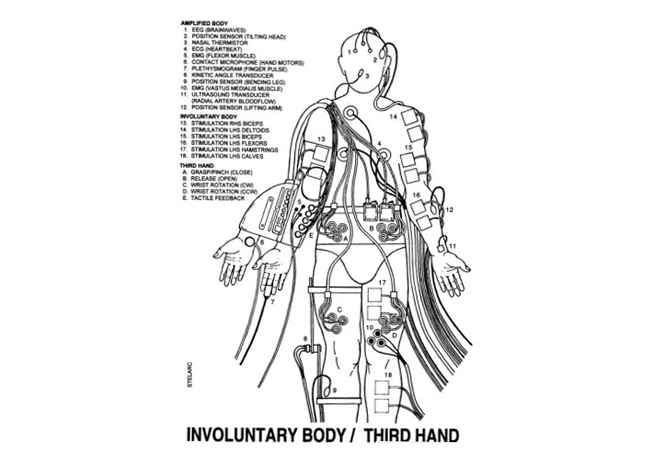 Stelarc’s art, often referred to as cyborg experiments, integrates inorganic matter with his body by renewing the neural activity that maintains equilibrium. By extending his body through heuristic machines, Stelarc redesigns and remaps perception. While his suspension events are worthy of debate, Stelarc’s later experiments with multimedia stimuli and the body and ideas concerning artificial intelligence will be the objects of focus. Ping Body an Internet Actuated and Uploaded Performance and ParaSite for Invaded and Involuntary Body are performances that occurred from 1995-98 and his artificial life experiment Movatar an Inverse Motion Capture System is on-going.

In the ParaSite performances, made in collaboration with Merlin, the cyborged body enters a symbiotic/parasitic relationship with the information. Images gathered from the internet are mapped onto the body and, driven by a muscle stimulation system, the body becomes a reactive node in an extended virtual nervous system (VNS). This system electronically extends the body’s optical and operational parameters beyond its cyborg augmentation of the third arm, muscle randomly scales incoming jpeg images. In real time the digital data are simultaneously displayed on the body and it’s immediate environment and, to the characteristics of this data, muscle movement is involuntarily actuated. The resulting motion is mirrored in a vrml space at the performance site, and also uploaded to a website as potential (and recursive) source images for body actuation, The body’s physicality provides feedback loops of interactive neurons, nerves, muscles and third hand mechanism with digital video and software code enmeshed within a n extended symbolic system mapped and moved by it’s search prosthetics. (gz/jc)

ParaSite was supported by the Pittsburgh Cultural Trust/Wood Street Galleries.

SFCI Archive: PARASITE, A Performance by STELARC (1997) from STUDIO for Creative Inquiry on Vimeo.