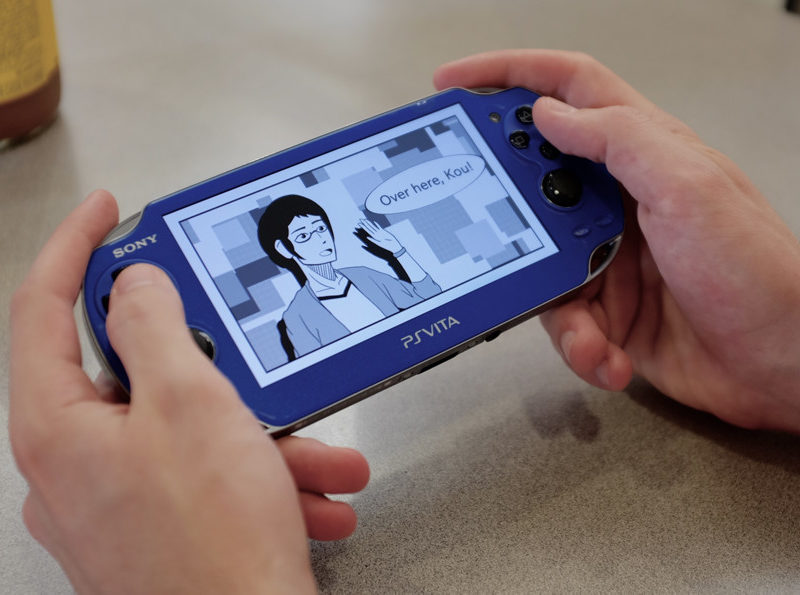 OTAKU: A DIGITAL MANGA :: Tyler Porten // Supported by FRFAF from STUDIO for Creative Inquiry on Vimeo.

A New Take on a Popular Genre

The medium of the digital manga Tyler Porten pursued with this project is a bridge between traditional graphic novels and animation. It is a flexible method in which still characters can be animated to emphasize important scenes. As a digital manga, the project primarily uses computer tools and software, including Unity, Photoshop, and Clip Studio Paint. The project includes hand-drawn digital illustration, text, and audio in the form of voice acting, sound effects, and music, and uses elements of the traditional graphic novel to produce the feel of a manga. Hence the reader sees one panel of the comic at a time and will control when to proceed, like turning the pages of a book. The reader can also pan the screen of the digital manga, being able to interact with the three-dimensional space in which the work has been constructed. Some animation companies and web artists have explored this technique for a portion of an animation or static comic, but I expanded it into a stand-alone medium. The digital manga expands upon the “visual” novel found in some Japanese video games, but the latter lacks animation and does not read as a manga.

The completed project is a multi-media digital manga in Japanese with English subtitles. It has been build in Unity, and is available for Mac, Windows, and PlayStation®Vita. The work includes the first chapter of one of the characters in the game, consisting of 98 branching dialogue options, and a total of 387 interactive panels.

The idea for Otaku: A Digital Manga originated in the spring of 2014. After studying abroad in Japan for a summer semester in 2013, Porten returned to CMU with a new perspective on his Japanese heritage, and began to incorporate it more and more into his work. After making short animations throughout the year, he realized that the medium of animation limited his storytelling to two to three minutes per project, due to the time-consuming production required to make an animated film. In the spring of his junior year, he decided that he wanted his senior project to be something “bigger” than any of his previous projects. There stemmed the idea of a digital manga, a medium that seemed as though he could produce more content than he would for an animation. This way, he could integrate the deeper themes I wanted in my work that required a longer story.

Focusing on Story and Experience

Tyler Porten began this project by first writing a manuscript that would form the basis of Otaku. He envisioned the project to be a choose-your-own-adventure type of interactive story, in which you read a portion of the story until you were prompted to make a decision for what the protagonist, Kou Shujin, should do. Depending on the decision you make, the story changes, resulting in a different path and different content. He prototyped the script using a tool called Twine in which you can interact with the story in a web browser. However, the experience did not achieve the desired level of interaction. He then turned to Unity, a flexible game engine that seemed better suited for what I hoped to accomplish.

Gathering a Team to Make it Happen

Porten wanted the experience of Otaku to be like reading a manga, watching an anime, and playing a game combined into one. This meant it needed to include a manga-like visual style, animations, background music, voice acting, as well as compelling game mechanics. He therefore brought together a team to assist with the production: Mark Strelow and Kyna McIntosh helped code the game in Unity, Adam Shield and Davis Good created sounds and music for the game, Ben Porten edited and translated the manuscript to English, and Kazunari Tanabe voiced acted Yuusuke Sakamoto (Kou was voice by Tyler Porten himself). The  Otaku game design was created to have a number of features that would gamify the manga, as well as the character designs to find the visual style appropriate for the project.

The final product was a functioning, interactive digital manga that works on Mac, Windows, and PS Vita.

The game includes a short text introduction about the characters, setting and goal, an interactive visual phase describing the various game options, and the game itself. Along with ninety-eight branching dialogue options, there are total of 387 interactive panels.

Although one of the reasons for creating a digital manga was to avoid the time-consuming production process of an animated film, Porten also wished to promote the traditional manga format of hand-drawn panels. Current story-based games like Visual Novels are static due to the limited number of story-changing options provided to the reader, and use a set number of illustrations to display characters. In Otaku, he wanted each new panel in the story to be a new drawing, resulting in a more dynamic interactive story. Therefore, every panel is hand-drawn so the game is more authentic and visually focused. This also gives readers the experience of constructing their own story, rather than passively reading a novel.

OTAKU: A DIGITAL MANGA was created with support from a microgrant from the Frank-Ratchye Fund for Art @ the Frontier (FRFAF) — an endowment founded to encourage the creation of innovative artworks by the faculty, students and staff of Carnegie Mellon University. With this fund, the STUDIO seeks to develop a cache of groundbreaking projects created at CMU — works that can be described as “thinking at the edges” of the intersection of disciplines.