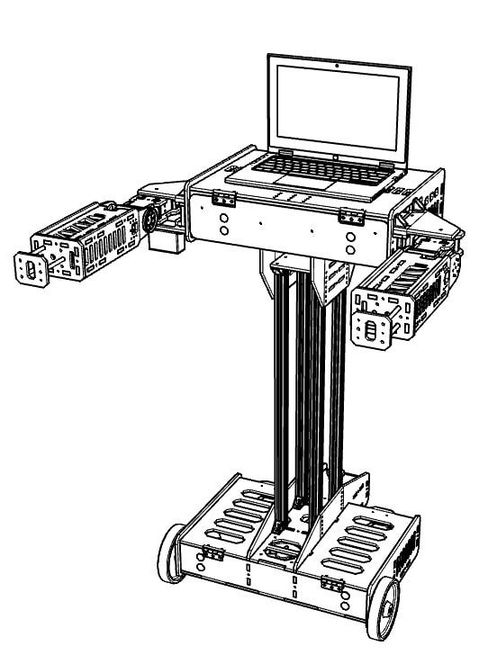 Multipurpose Mobile Manipulator by John Choi :: Supported by FRFAF from STUDIO for Creative Inquiry on Vimeo.

The Multipurpose Mobile Manipulator project is an Advanced Robotics Project by John Choi that anyone in the CMU community can join, regardless of major or expertise by significantly lowering the barrier to entry in both cost and difficulty for performing human-size mobile manipulation research. It is aimed to build a series of research-grade mobile manipulator platforms.

A SURG grant of 500 USD was acquired to build one of these robots. The first Multipurpose Mobile Manipulator was constructed with a microgrant from the Frank-Ratchye Fund for Art @ the Frontier (FRFAF) — an endowment founded to encourage the creation of innovative artworks by the faculty, students and staff of Carnegie Mellon University. A regular FRFAF grant further supported the project into a Robotics Club. With this fund, the STUDIO seeks to develop a cache of groundbreaking projects created at CMU — works that can be described as “thinking at the edges” of the intersection of disciplines.

During the summer of 2015, the first revision of the Multipurpose Mobile Manipulator was developed using computer aided design, and various components were experimented upon. Within the first few weeks of the Fall 2015 Semester, plywood parts were laser cut and interest was gathered through the Robotics Club and the 15-112 Fundamentals of Programming Class.

Over 50 undergraduates, most of them first year students with no experience in robotics, signed up to be a part of the project, making it the largest Robotics Club project in its 31 year history. The team is an extremely multidisciplinary bunch with majors including Art, Computer Science, Electrical and Computer Engineering, Information Systems, Mechanical Engineering, Physics, Mathematics, and Cognitive Science. Effectively, this project represents a significant portion of the entire breadth of Carnegie Mellon University.

Tutorial sessions on the basics of robot-building, including Arduino, electronics, fabrication or 3D CAD design were given to the members. Each group works on a specific behavioral task with the guidance and mentorship from Jon Choi.

Members were split into teams, designated according to the NATO alphabet (Alpha, Bravo, Charlie…), where each team has been given a specific task for the robot to do. Currently, there are 8 groups with 3-5 people each, which are as follows:

This project will be a living testament to the idea that anyone, regardless of major or experience, can create great things if they put their heart, mind and soul to it. By, every single individual participating in this project will have helped in the development of an advanced humanoid robot in an inclusive community of hackers, artists, and doers.

The Multipurpose Mobile Manipulator truly bridges gaps in technology and art in many more ways than one. As it stands, the Multipurpose Mobile Manipulator is a marriage of the functional and the aesthetic, the behavioral and autonomous, and the machine-like and the human-like. The robot is named “multipurpose” for a reason. Some examples of use cases include household chores like sweeping and delivering coffee, while more artistic examples include exploring the artificial imagination with painting and acting, and some silly examples include Lightsaber dueling. Finally, this project transforms the realm of highly exclusive, bleeding edge robotics into a package that anyone who wishes to use it can.

The Multipurpose Mobile Manipulator  was created with support from a grant from the Frank-Ratchye Fund for Art @ the Frontier (FRFAF) — an endowment founded to encourage the creation of innovative artworks by the faculty, students and staff of Carnegie Mellon University. With this fund, the STUDIO seeks to develop a cache of groundbreaking projects created at CMU — works that can be described as “thinking at the edges” of the intersection of disciplines.