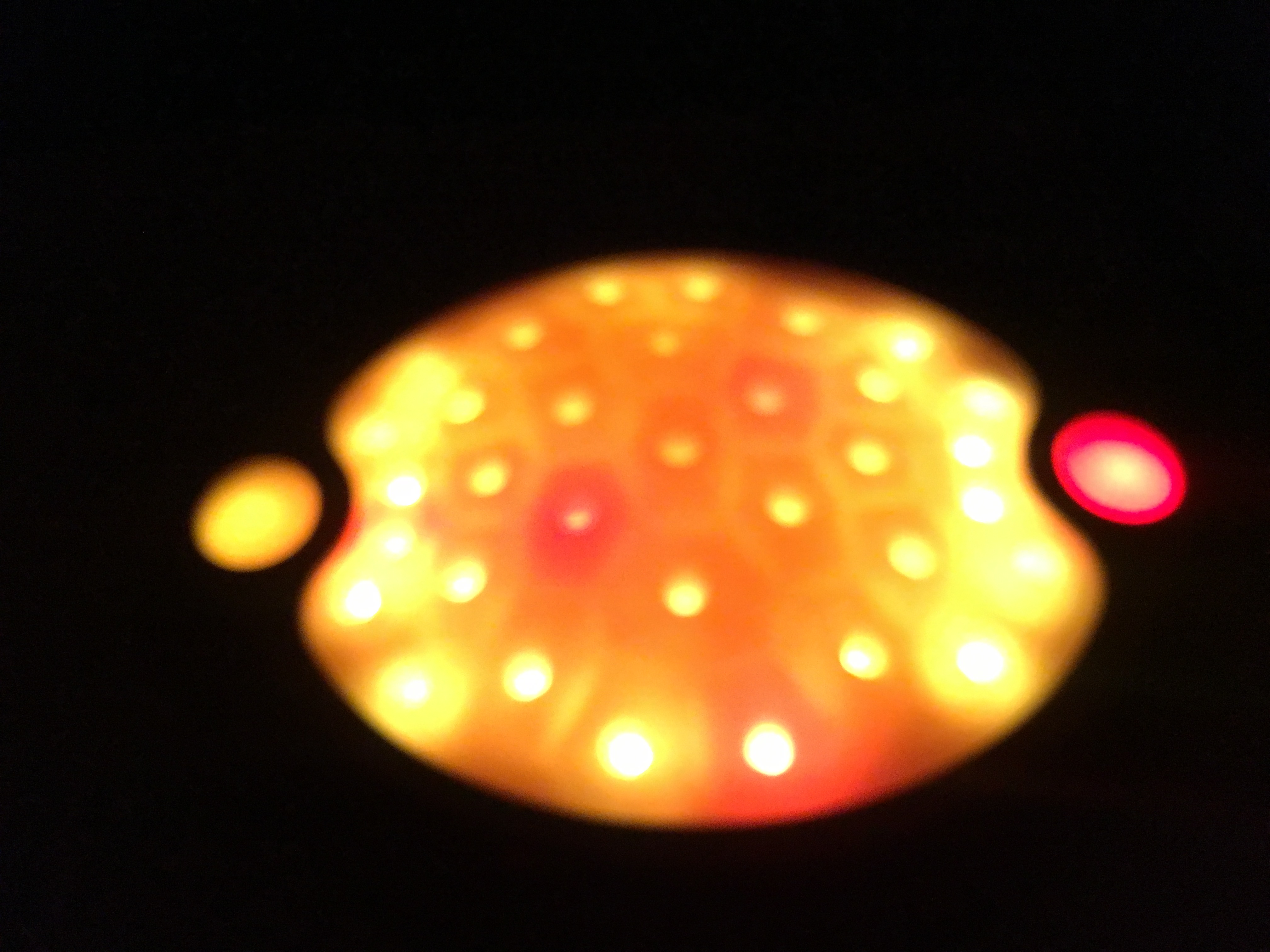 Nick Crockett writes of his project CONFRONTING THE FRUITFORM:

“A crowd surrounds a glowing FRUITFORM. For some the compulsion to touch is overwhelming, and they begin probing its radiant, rubbery flesh without a second thought. Others are uneasy and stand back, unwilling or unready to partake. The fruit is obviously inanimate, unresponsive to touch. And yet it is alluring and lively in it’s own strange way, gently pulsing warm light from its thirty-three cells. As those touching become more familiar they try to discern meaning in the flashes of red which originate deep in the rubber, and brutal contests for control of the FRUITFORM are played out across its soft translucent surface as it lies quietly, passively illuminating the hands and faces of those surrounding it. — CONFRONTING THE FRUITFORM is an electronic toy which consists of an array of LEDs embedded in a wood and silicone rubber fruit with 33 cells. Lights below the cells change color, indicating (perhaps) where players should attempt to insert their fingers. As the game progresses, player’s hands quickly become stretched and entangled in often uncomfortable ways. The project began with a longstanding fascination with toys and game controllers, the physical objects handled and employed in play.

Like architecture, these objects frame fields of potential activity: traditional toys like the kendama or the spinning top seem to contain almost intrinsically the instructions for their use: the player’s body is given over to goals imposed or potentials revealed by the features of a physical object. As Barthes observed in his essay Toys (1957), playthings are also always overloaded with other cultural meanings, both in their forms and in the performances they elicit in players. Play can also be understood as the exertion of one’s powers for its own sake; for the joy of it. If that is so then it’s certain that complicated dynamics of power and cruelty can unfold in play. One only has to observe the brutal way that some predatory animals play with their prey to see this. CONFRONTING THE FRUITFORM is then also an attempt to unpack or navigate complex dynamics of power and pleasure in play, which is also always roleplay. The game mechanics set up an uncertain, intimate relation between players and the inanimate glowing form as they compete for control or caress it’s soft glowing surface.”