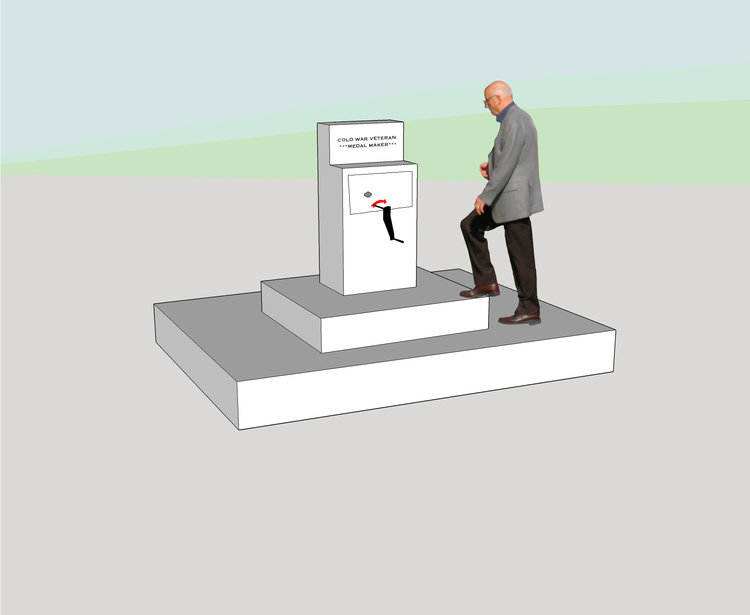 Veterans of the Cold War never received recognition because it was never declared. Unless veterans participated in hot wars like Vietnam or Korea, or qualified for the National Defense Service Medal, they also never received a medal. The Press-A-Penny Medal Maker would use everyday US pennies to allow veterans of the Cold War to create their own. The Press-A-Penny Medal Maker would allow veterans to create personalized medals, indicating their names, dates of service and type of service. Because involvement in the Cold War was extensive and global, who-and-how people are veterans is slippery.

The Cold War Medal Maker by Kim Beck inverts the traditional monument since it requires the veteran to actively participate in its making. Placed atop a pedestal, the Medal Maker is activated when a veteran steps up to it to press their penny and make a medal; by standing on top of the pedestal, they also take the place where typically a cast-bronze warrior or hero might stand. This project problematizes the idea of the hero. Because the Cold War was a tangle of global offenses and defenses, the notion of victory is a maze. This monument opens up the notion of victory to any participant who claims it, rendering it not just a war dominated by Soviet and US interests, not just a fight between communism and capitalism and democracy, but one which seeped into the corners of homes and lives. An everyday, almost valueless penny dug out of the pocket will be transformed into a precious memento laced with meaning.

FRFAF support in the amount of $450 allowed Kim Beck to purchase a small press that was used emboss pennies with text. It was an temporary alternative to a more elaborate and expensive penny press machine. The piece was included as a speculative proposal in the first exhibition at Cooper Union. A second exhibition in LA is in the works for 2018.

Cold War Medal Maker was created with support from a grant from the Frank-Ratchye Fund for Art @ the Frontier (FRFAF) — an endowment founded to encourage the creation of innovative artworks by the faculty, students and staff of Carnegie Mellon University. With this fund, the STUDIO seeks to develop a cache of groundbreaking projects created at CMU — works that can be described as “thinking at the edges” of the intersection of disciplines.