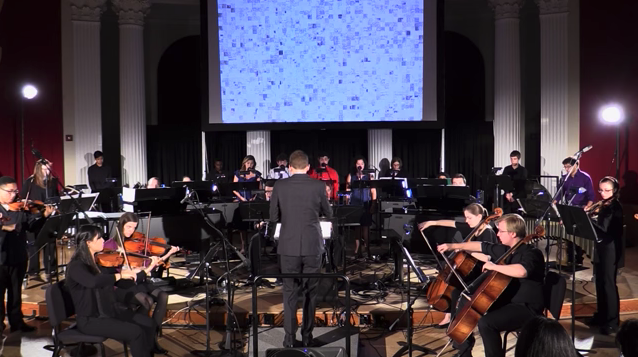 On November 22nd, 2015, the CMU Contemporary Ensemble, under the direction of Music Director Daniel Nesta Curtis, performed to a standing-room-only audience in Alumni Concert Hall.  The performance entailed two works that call for an audacious instrumentation including 4 pianos and multiple percussion, among other instruments: Steve Reich’s Daniel Variations and George Antheil’s Ballet Mecanique.  Both works also involved projected visual elements.

A mid-quality EPSON projector was placed in the middle of the room on a projector cart that raised the projector up 7 feet.  This allowed the projector to shoot above the heads of the performers and with sufficient brightness. The projected elements for Daniel Variations were newly commissioned for this performance from new media artist and CMU alumnus Doug Bernstein.

The theatrical lighting and projected visual elements of the project was entirely created with support by a regular grant from the Frank-Ratchye Fund for Art @ the Frontier (FRFAF) — an endowment founded to encourage the creation of innovative artworks by the faculty, students and staff of Carnegie Mellon University. With this fund, the STUDIO seeks to develop a cache of groundbreaking projects created at CMU — works that can be described as “thinking at the edges” of the intersection of disciplines.

The Carnegie Mellon University Contemporary Ensemble performs music composed in the last twenty years in concerts that feature multidisciplinary collaboration, technology, improvisation, and theatrical elements. The Ensemble often highlights the work of students and faculty. More information on the CMU Contemporary Ensemble can be found here.