Cathartic Objects by Michal Luria :: Supported by FRFAF from STUDIO for Creative Inquiry on Vimeo.

Cathartic Objects by Michal Luria is a project that focuses on interaction design of technology to support destruction and catharsis. While people are just as like to destroy as they are to create, most interaction design research focuses on “creators” and “makers”. This project brings a set of objects with the sole goal of enabling destructive behaviors.

The project is derived from previous work that included a theoretical review of the historical and cultural background of destruction, and created a destruction robot for creation, catharsis and emotional release, iNkondi.

For many people, destruction is coupled with a negative association. Yet over thousands of years, people have been destroying: purposefully, playfully, accidentally. Although this is a very common behavior, very little research in HCI and interaction design has looked into aspects of destruction and catharsis.

The objects were inspired by their materials. In the process of making, I noticed how different materials bring a different range of destructive behaviors. By selecting the material, I inevitably chose the type of destruction and catharsis that interaction with the object would have. Some of the materials in the sketch are yet to be explored in a physical prototype. 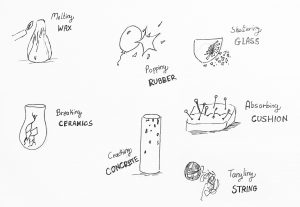 Object1 senses when it is poked with a sharp object. It responds in side-to-side gestures that signal it has absorbed the pain. When too many sharp objects are inserted into it, it continues shaking until all objects are removed, completing a cycle. 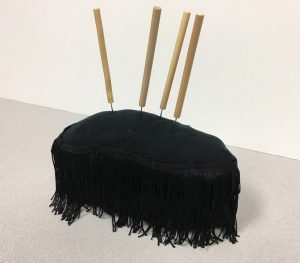 Object 2 absorbs curse words. The object listens at all times, waiting for moments in which people need a vocal outlet to express their frustration. The object only knows curse words. When they arrive, the object feeds on them and transforms the negative energy into light. 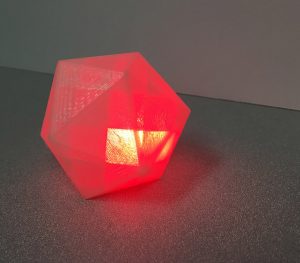 Object 3 is a soft, rag-doll-like prototype with a quite irritating laughing voice. When the user seems to be upset, the doll starts laughing. It’s annoying laughter is intended to encourage the user to physically take out their negative energy on the doll. The doll continues laughing as long as the user needs additional cathartic interaction. When the user feels better, it stops. 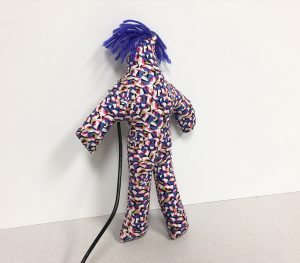 Object 4 allows users to create a personalized message, and then destroy it. By writing or drawing on a ceramic tile and then inserting it into the object, users can express their frustration and anger with a specific source without doing harm. They can also experience creation and its destruction side-by-side. Finally, the object enables the user to keep their source of frustration and document the symbolic cathartic action in the form of an artifact at the end of their interaction. 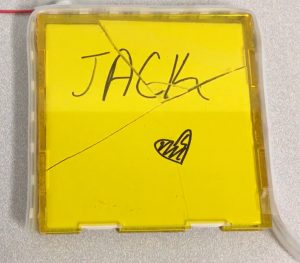 Future work will attempt to test out these concepts of destruction and catharsis in an interactive installation setting. By having people directly interact with cathartic objects, I hope to learn more about people’s emotions and experiences, as well as perceptions and values regarding interactive objects that are designed to support behaviors of destruction and catharsis.