The Frank-Ratchye STUDIO for Creative Inquiry is delighted to host one of the most celebrated visual and performing artists of our time, South Africa’s William Kentridge. Following the screening of his work The Head & the Load, recorded during its world premiere at Tate Modern (London, UK,) Mr. Kentridge will join us via Zoom for a Q&A moderated by School of Drama Professor Ivan Talijancic, joined by a panel of MFA John Wells Directing Fellows and Professor Erika Latta (Simon Fraser University.)

The Head & the Load is about Africa and Africans in the First World War, that is to say about the contradictions and paradoxes of colonialism that were heated and compressed by the circumstances of the war. It is about historical incomprehension (and inaudibility and invisibility). The colonial logic towards the black participants could be summed up as, ‘Lest their actions merit recognition, their deeds must not be recorded.’ The Head & the Load aims to recognize and record those deeds. RSVP required 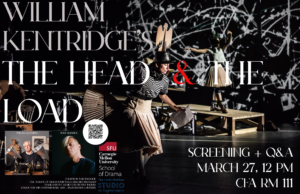 William Kentridge (born Johannesburg, South Africa, 1955) is internationally acclaimed for his drawings, films, theatre and opera productions. His practice is born out of a cross-fertilisation between mediums and genres. His work responds to the legacies of colonialism and apartheid, within the context of South Africa’s socio-political landscape. His aesthetics are drawn from the medium of film’s own history, from stop-motion animation to early special effects. Kentridge’s drawing, specifically the dynamism of an erased and redrawn mark, is an integral part of his expanded animation and filmmaking practice, where the meanings of his films are developed during the process of their making. Kentridge’s practice also incorporates his theatre training. Kentridge’s work has been seen in museums and galleries around the world since the 1990s, including Documenta in Kassel, the Museum of Modern Art in New York, the Albertina Museum in Vienna, Musée du Louvre in Paris, Whitechapel Gallery in London, Louisiana Museum in Copenhagen and the Reina Sofia museum in Madrid. Opera productions include Mozart’s The Magic Flute, Shostakovich’s The Nose, and Alban Berg’s Lulu, and have been seen at opera houses including the Metropolitan Opera in New York, La Scala in Milan, English National Opera in London, Opera de Lyon, Amsterdam opera, and others. Summer 2017 saw the premiere of Kentridge’s production of Berg’s Wozzeck for the Salzburg Festival.

Ivan Talijancic (he/him) is a time-based artist and cultural producer, working at the intersection of theater, dance, film, installation art, new media, journalism, curatorial work and education in New York and around the globe. Ivan completed his undergraduate studies in theater at the University of California, San Diego, and earned his Master of Fine Arts degree at Columbia University in New York City under the mentorship of Anne Bogart and Robert Woodruff. Along with Erika Latta, he is the co-founder of WaxFactory, a New York-based international multidisciplinary art group. He has created over 20 works to date, presented at many preeminent venues on four continents over the past two decades. Ivan’s creative output spans a diverse range of art projects ranging from intimate chamber cross-media works at established venues (blind.ness at Performance Space 122 in 2008 & COIL 2010 Festival), site-specific works at unconventional sites (QUARTET v2.0 at the former cannon factory in Long Island City in 2002), large-scale immersive productions taking up an entire city block (LADYFROMTHESEA at the Old American Can Factory in Brooklyn in 2001 and 2003), and feature film (416 MINUTES, shot on location around New York City, and currently in post-production). His works have twice been featured in annual Worldwide Critics Surveys published by Ballet-Tanz International magazine (Berlin, Germany) — LADYFROMTHESEA as the “most innovative production of the year” in 2000, and X – A VIDEO OPERA in 2007 as the “most innovative collaboration” with composer Katharina Rosenberger. His works have been shown at numerous venues throughout the New York City (Lincoln Center, PS122, Abrons Art Center, 3LD Art+Techology Center, Japan Society, Dixon Place, HERE, Soho Rep, The Invisible Dog) and at numerous international venues and festivals including the ICA/Institute for Contemporary Art (London, UK,) Sónar (Barcelona, Spain,) Centre Pompidou (Paris, France,) Gulbenkian Museum (Lisbon, Portugal,) Zürcher Theaterspektakel (Zurich, Switzerland,) Cankarjev Dom (Ljubljana, Slovenia,) FIT/International Theater Festival (Caracas, Venezuela,) Centro Julio Le Parc (Mendoza, Argentina,) Adelaide Festival (Adelaide, Australia) and many others.