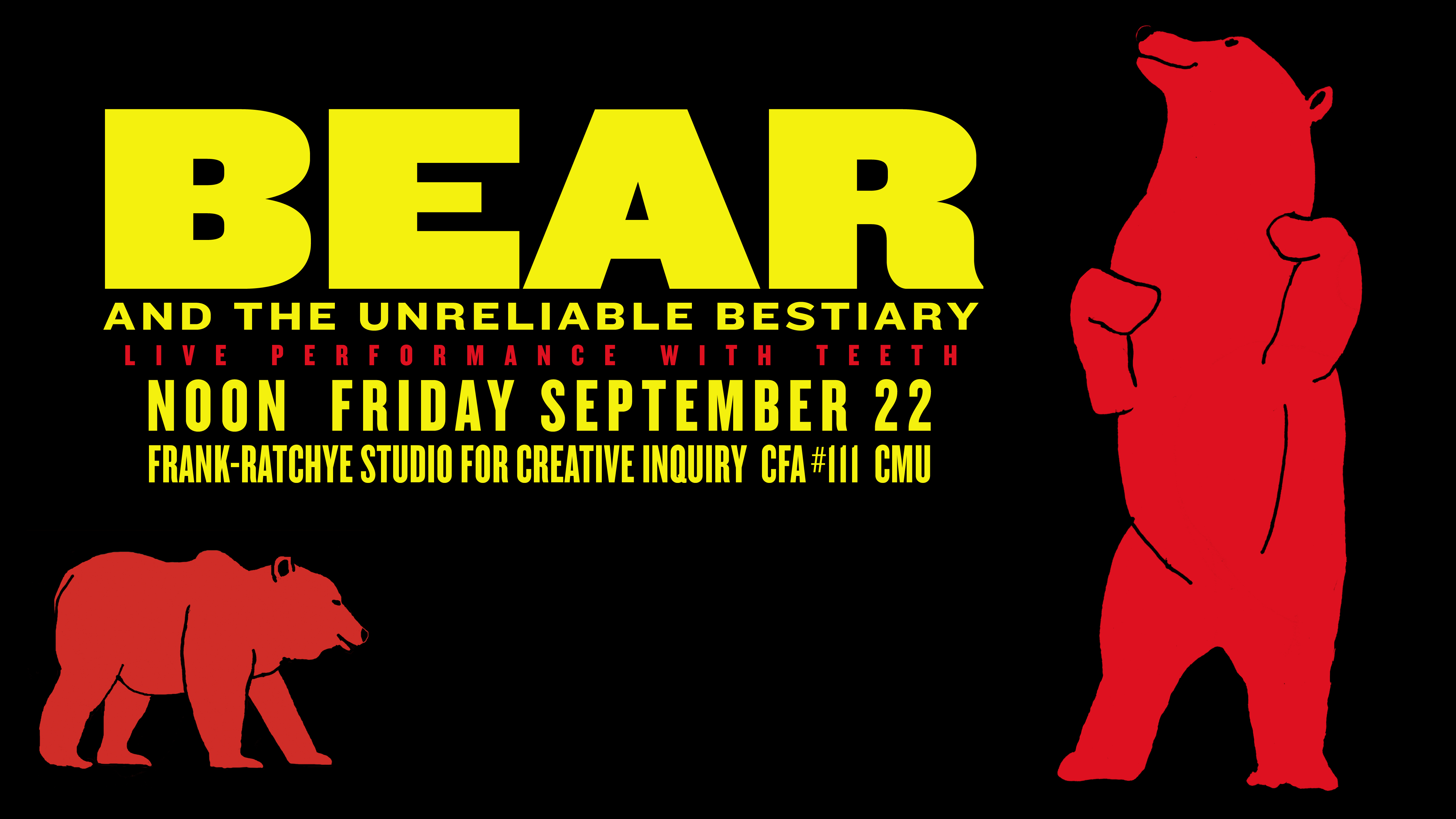 This event is free and open to the public. Light refreshments will be served.

This event is made possible in part by the Carnegie Mellon University School of Art and the Center for the Arts in Society.

BEAR is the 4th interdisciplinary public performance in a life-long project, The Unreliable Bestiary: a performance for every letter of the alphabet, each letter representing a particular endangered animal or habitat. To date we’ve presented MONKEY, ELEPHANT, and WOLF.  The project has been supported by grants from Creative Capital and the Guggenheim Foundation.  Smaller versions of these sprawling, site-specific events have been presented at the Sundance Film Festival, the Houston Cinema Arts Festival, the Cinema Pacific Film Festival, the Goat Farm (Atlanta), classrooms, living rooms, theaters, museums, and galleries across the country.

To reflect the bear’s hibernation cycle, BEAR was presented in three parts:

The final installation crawled audiences through a winding tunnel to a small dimly lit den where a bear-man told his intimate story.

Six videos, a video for each month the bear hibernates, will be released online. The videos featured clues to a geocaching hunt, bridging the work from Fall to Spring.

Audience and performers seated at a huge wooden tables covered with cake, wine, and candles, the final section of BEAR featured live musicians, and two intertwining tales: a bear becoming human, a human becoming a bear. What happens when each transitioning creature meets the other midway?

Set in a future of post-climate collapse, a time when we’re scrambling to put back in place what has been lost for good, finally realizing that for many ecosystems to actually work you need all the parts, including bears – the darkly humorous BEAR world was built from scrap material and powered with wind/hand-crank/solar. The Fall Chapter’s absurd, build-it-and-they-will-come magical thinking called back the bears by re-telling a story and walking a path for hours and hours.

The Spring chapter continued and altered the narratives explored in the Fall and Winter chapters – a man who has lost everything and a bear who can read. The Spring BEAR felt communal, warm, and ultimately optimistic. We had wine. We had cake. We had light. And we had each other.

“WOLF was a singular and haunting experience.”

“Each installment of Deke Weaver’s Unreliable Bestiary has been more incredible than the last. Perhaps it’s the brilliant story telling, or maybe it’s Weaver’s performance presence. WOLF is one of the most moving and profound and completely immersive theater experiences I’ve ever had. It somehow taps deep into your own childhood psyche to give you an empathic – and fantastic – connection to the animal kingdom that just doesn’t go away.”   Jonathan Fineberg – scholar, curator, and author

“2010 wouldn’t be complete without the Art 21 world knowing about this mind-blowing show in a stock pavilion… I don’t know where to begin here, whether it was Deke Weaver’s humor, epic video productions or thoughtfully crafted dance and music by his collaborators, Jennifer Allen and Chris Peck. Weaver’s videos were stunning… Weaver’s style, a layering of live footage, stop-motion animation, projected text and monologue combine to create a sense that there is more to a story than what we see or hear… Allen’s ability to create subtle yet precise differentiations in the dancers’ gestures and formations was remarkable, virtuosic and gritty. The secret of Elephant… is wrapped into a package of video, music, dance and narrative performance that is sensational, entertaining and humorous.” Marissa Perel – Art 21 Blog

“MONKEY shines in unpredictable ways. … a journey as holy and outrageous as the mythology of Hindu monkey gods or of 1950s Hollywood science fiction, redemption and sacrifice all rolled up like King Kong at the top of the Empire State Building. MONKEY offers a compact, nuggety mindblower…”   Smilepolitely.com

Deke Weaver is a writer-performer, director, and media artist. His performances and videos have been presented throughout the U.S. and abroad in experimental theater, film/video, dance, solo performance, and broadcast venues such as the Sundance Film Festival, PBS, Channel 4/U.K., the New York Video Festival at Lincoln Center, the Chicago Humanities Festival, the Berlin Video Festival, the Museum of Contemporary Art/LA, the Moth, Yerba Buena Center for the Arts and many others including livestock pavilions, national parks, night clubs, backyard sheds and living rooms.  A resident artist at Yaddo, Isle Royale National Park, the Taft-Nicholson Environmental Humanities Center, HERE, a three-time resident at Ucross, a five-time fellow at the MacDowell Colony, his work has been supported by a Guggenheim Fellowship, Creative Capital, commissions, fellowships, and grants from the city of San Francisco, the states of Illinois and New York, the University of Illinois (Urbana-Champaign) and other public and private foundations.  He is currently an associate professor at the University of Illinois, Urbana-Champaign with appointments in the School of Art & Design and the Department of Theater.  www.unreliablebestiary.org