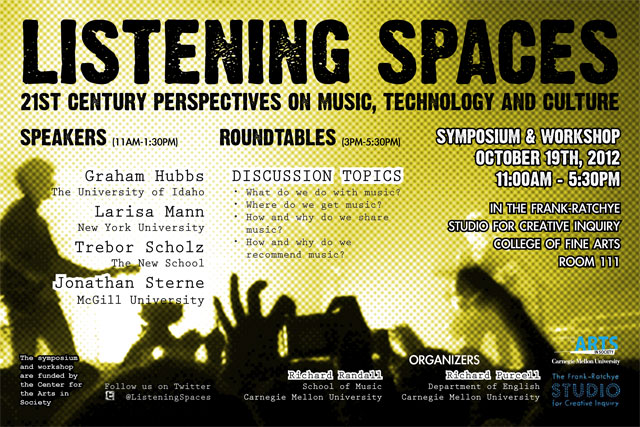 As part of the project Listening Spaces a symposium and workshop on 21st Century Perspectives on Music, Technology, and Culture was held on October 19th 2012 with talks by Larisa Mann, Trebor Scholz, and Jonathan Sterne, organized by Richard Purcell and Richard Randall.

10:55am: Opening Remarks by Organizers Richard Purcell and Richard Randall

Graham Hubbs is an Assistant Professor in the Philosophy Department at the University of Idaho. His primary area of study is practical rationality, but he has recently been working on ethics in the digital age as well, including a project on Wikileaks. Graham is also a member of the Toolbox Project, which helps facilitate interdisciplinary collaboration through epistemological intervention. Graham received his PhD from the University of Pittsburgh, has led service-learning courses in Tanzania, and is a former Fulbright Scholar in Italy.

Larisa K. Mann is a legal ethnographer, educator, journalist, public speaker and award-winning DJ. With a PhD from UC Berkeley Law School’s Jurisprudence and Social Policy department, she is currently teaching in Media Culture and Communication at NYU and in Sociology at Brooklyn College. She also performs in and organizes musical and cultural events in collaboration with local artists and activists in New York and beyond. Her dissertation explored the intersection of culture, copyright law, technology and power, through an ethnographic case study of Jamaican music-making. Mann also has written on technology and rights for the youth news website WireTap, and addressed policy, technology, activist and academic audiences across the US and internationally.

Trebor Scholz teaches in the Department of Culture and Media Studies at the Eugene Lang College of The New School for Liberal Arts in New York City. His research interests focus on social media, especially in education, art, and media activism outside the United States and Europe. His artwork was shown at several Biennials and he has contributed numerous book chapters and articles in the area of Internet Studies. He has co-edited The Art of Free Cooperation (2007) and Digital Labor: The Internet as Playground and Factory (2012).

Jonathan Sterne teaches in the Department of Art History & Communication Studies program at McGill University. He writes about sound and music, communication technologies old and new, contemporary cultural studies, and a range of other matters. He has published in numerous journals and his books include The Audible Past: Cultural Origins of Sound Production (2003), The Sound Studies Reader (2012) and his most recent book MP3: The Meaning of a Format (2012), which considers the mp3 as an historical, cultural and political artifact.

Richard Purcell is an Assistant Professor of Literary and Cultural Studies in the English Department at Carnegie Mellon University. His research interests include 20th and 21st century American literature and popular culture with a particular focus on Cold War politics and the role race and writers of color played during the cultural Cold War. He has published on Kant, the Cultural Cold War, novelist Ralph Ellison and topics related to literary and cultural criticism.

Richard Randall is an Assistant Professor of Music Theory in the School of Music at Carnegie Mellon University and directs the Music Cognition Lab. He holds a faculty appointment at the Center for the Neural Basis of Cognition and is a researcher at the University of Pittsburgh’s Brain Mapping Center. Randall received his PhD in Music Theory from The Eastman School of Music. He has published on the cognitive neuroscience of music, musical expectation, mathematical modeling in music analysis, and philosophy of music theory.