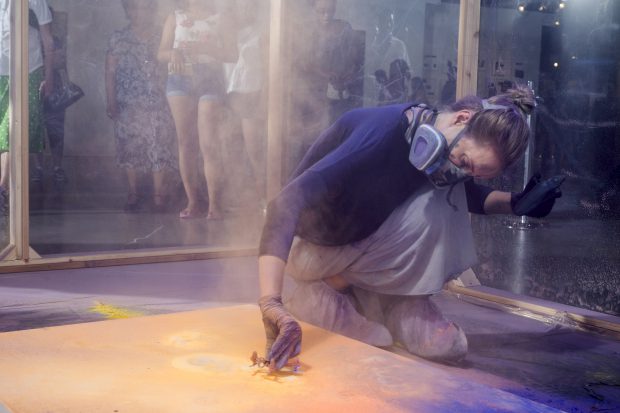 Addie Wagenknecht is an anti-disciplinary, experimental artist who works in the fields of emerging media, feminist theory, open-source tools, pop culture, and hacktivism. Known for works that span media including robotics, drones, network hardware, 3D printing and traditional paint on canvas, her work has been featured in the Vienna, Moscow, and Istanbul biennials and acquired by the Whitney Museum of American Art, and she’s collaborated with Chanel and i-D magazine on a series of projects exploring the sixth sense.

Wagenknecht has been active in the development and management of open-source hardware projects and communities. From 2014-2017, Wagenknecht served as Chair of the Open Source Hardware Summit. With Stefan Hechenberger, she co-founded NORTD Labs, a research and development collective which developed a variety of open-source multi-touch systems, and the Lasersaur, the world’s first widely-implemented, open-source laser cutter.

Wagenknecht frequently works in collectives. She founded Deep Lab in 2013, a cyberfeminist research congress concerned with issues of privacy, security, surveillance, anonymity, and alternative market economies. Previously, she was a member of the now disbanded Free Art and Technology (F.A.T.) Lab, a global tactical media collective. Wagenknecht has received fellowships and residencies from Eyebeam, Google, and Mozilla, and is represented by bitforms gallery in New York City.

“Addie Wagenknecht knows what the void means. By this, I mean she’s an artist who plays with absence and the inheritance we leave behind; her works are clues into the world of technology and feelings that make up her brain, but they aren’t explanations of it. That would be too easy. She builds her art in unconventional ways — hacking sculpture and robotics together to create a traditionally beautiful thing from disturbing means and creating a visually disturbing thing with traditional ones. Wagenknecht’s series ‘Black Hawk Paint’ and ‘Internet of Things’ used drones and Roombas, respectively. Besides creating art exhibited around the world, she founded the collective Deep Lab, who work in cybersurveillance, research, coding, hacking, art, and theory. Her latest work, ‘Alone Together’ is a series of paintings utilizing Yves Klein’s namesake blue, painted using a Roomba as a brush, letting it navigate around her nude body as she reclined on a canvas. The result is a void in the shape of a woman, painted by a robot learning the algorithm it intuited of her body. In a time where meme-based cryptocurrency is eating up the world’s entire output of energy and Trump has proposed slashing the National Endowment of the Art’s budget out of existence, urgent work discussing where our bodies belong in the future of art and tech has never felt more necessary.” — Arabelle Sicardi

This lecture is presented by the Frank-Ratchye STUDIO for Creative Inquiry at Carnegie Mellon University, and is made possible by the Sylvia and David Steiner Speaker Series.