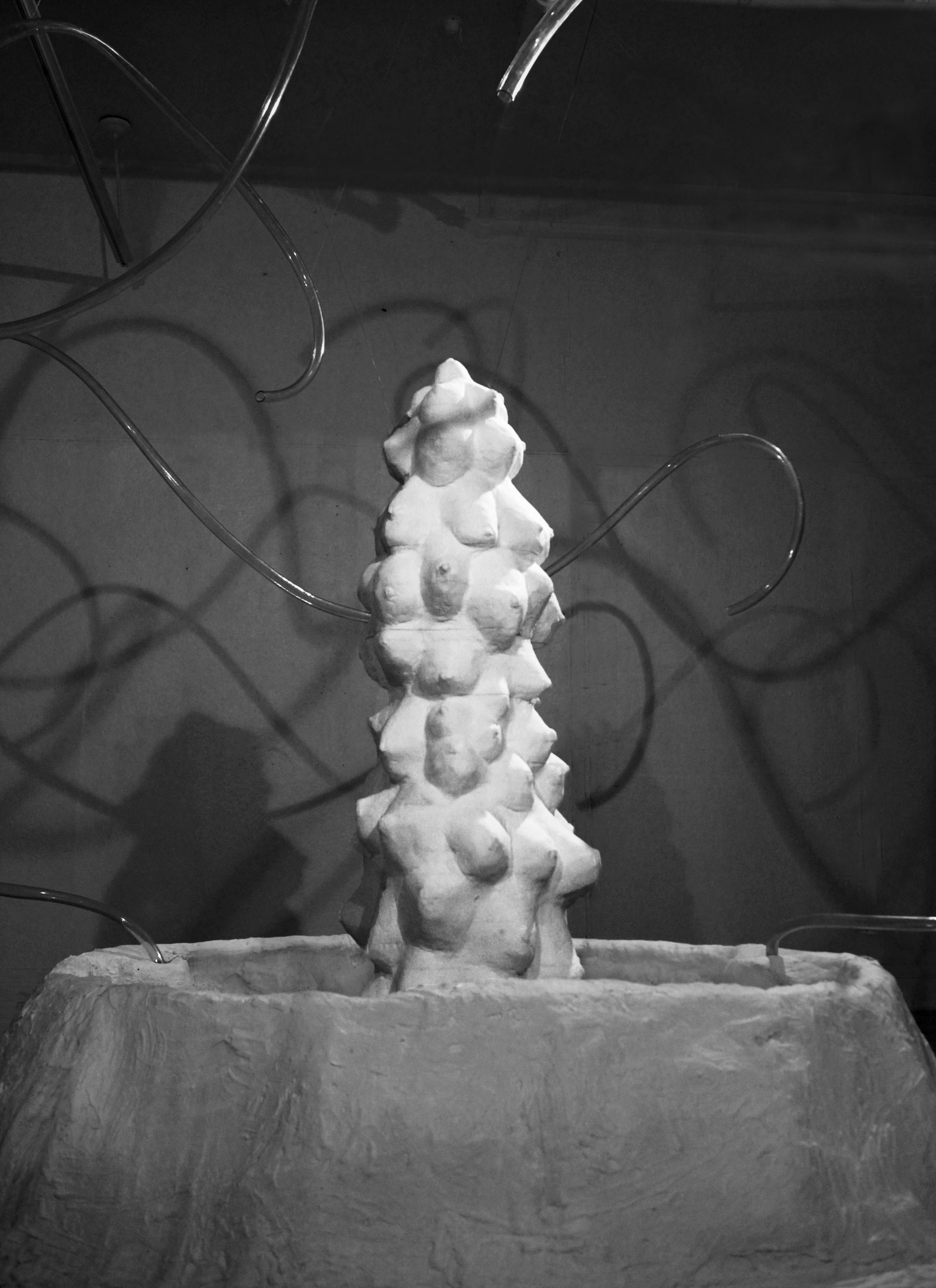 Incarnate by Gwen Sadler and Char Stiles :: Supported by FRFAF from STUDIO for Creative Inquiry on Vimeo.

This sculptural installation by Gwen Sadler and Char Stiles is an exploration of the female psychic and physical condition; her desire to be everything and nothing, and the inevitable wane and wax between material and transcendent being. The 21st century woman entrusts many provided and foreign and artificial substances to function ideally in the world. Her body is a composite of natural and artificial material trying to concoct the ideal bodily behavior and hence the life she desires. By suspending herself from her nature and creative power she welcomes many substances into her body creating a more unstable heterogeneous state, and hence entropic. Gwen and Charlotte were inspired by the creation myths that describe creation as the fragmentation of a primordial unity; and hence destruction as a repairing this fragmentation that resulted in dualistic and entropic nature.

The materials chosen for sculptural form mirror this current heterogeneous/volatile state of woman. Iron is the most abundant element in the earth, earth has always mythically, spiritually, psychically been associated with woman. But culturally and alchemically iron is of man, it is manufactured and industrial. Styrofoam is one of the most ignoble and artificial substances and yet is composed mostly of air. These substances we see as representing a tension between their natural and artificial elements, as in a woman’s body, and the tension of opposites forced into one, creates instability and a destructive path for these materials. Although the iron and styrofoam are composed to destroy themselves they will never completely vanish, just as our bodies will never become obsolete. Styrofoam will break into smaller and smaller particles but will take innumerable years to actually decay, just as cast iron will persist forever underneath its rust. With choosing these materials we hope to represent the inevitability of self destruction but also the perpetuation of matter and spirit beyond its original body; and also to represent this journey back into the homogeneous/stable, the waters of the beginning, before woman chose fragmentation.

Styrofoam and iron compose the central sculpture, a styrofoam figure is sculpted around an iron core that is slowly revealed as the styrofoam melts away. The organic solvent flows up through the figure in a series of tubing and pumps. The destructed styrofoam and iron particles along with the solvent culminate into a homogeneous pool and flows out into a network of tubing throughout the gallery, and recycled back to the central pool and sculpture.

This proposal is heavily influenced by the creators’ previous work. Charlotte made a melting styrofoam piece in recent past and wants to revisit this process. Gwen has been making cast iron sculpture and doing performative work, and Charlotte saw this as relieving the cast iron of its static quality as an object as it becomes a dynamic role in a decaying sculpture. Both of their previous works have explored many facets of the female condition, natural processes, especially deconstruction and beauty of decay; which is what spurred a desire to collaborate.

Incarnate was created with support from a grant from the Frank-Ratchye Fund for Art @ the Frontier (FRFAF) — an endowment founded to encourage the creation of innovative artworks by the faculty, students and staff of Carnegie Mellon University. With this fund, the STUDIO seeks to develop a cache of groundbreaking projects created at CMU — works that can be described as “thinking at the edges” of the intersection of disciplines.