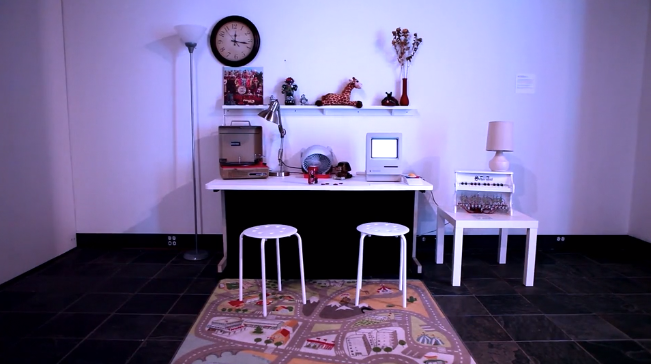 Girl in the Computer by Ticha Sethapakdi :: Supported by FRFAF from STUDIO for Creative Inquiry on Vimeo.

“She is 22 years old. Even then she still has dreams where she’s 8 and walking through the halls of her old house by the lake. In those dreams everything is more alive than how she remembers them, yet hardly anything is in its right place. She hears the echo of a woman’s voice from across the room and she is scared to go towards it because she knows that once she does, she’ll wake up and the house is gone.

The familiar touch of cold marble presses against the soles of her feet and she decides to keep dreaming…for a little while.”

Ticha Sethapakdi’s Girl in the Machine is an interactive installation that has the appearance of a workstation decorated by nostalgic artifacts—such as a dusty record player, an old Beatles LP album, and a 90’s robot toy.  On top of the workstation sits an old Macintosh Classic II computer, in which Sethapakdi embedded a ‘maze’ containing a file system that reconstructs the house Sethapakdi lived in as a child.  Since the keyboard is absent the viewer can only use a trackball mouse to navigate through the ‘house’ and unlock the stories based on my childhood, all narrated by a synthesized version of Sethapakdi’s voice.  Accessing certain memories causes special inanimate objects, controlled by an Arduino, to spring to life.

A Macintosh Classic II was disassembled and had its original hardware replaced with a Mac Mini. Sethapakdi then wrote an Applescript program that turns the Mac’s file system into an interactive maze. When certain conditions are satisfied (e.g. the user opens special files or visits a folder a certain number of times), the program sends the Arduino serial messages that encode which devices should be activated.

Girl in the Machine was created with support from a microgrant from the Frank-Ratchye Fund for Art @ the Frontier (FRFAF) — an endowment founded to encourage the creation of innovative artworks by the faculty, students and staff of Carnegie Mellon University. With this fund, the STUDIO seeks to develop a cache of groundbreaking projects created at CMU — works that can be described as “thinking at the edges” of the intersection of disciplines.

Ticha Sethapakdi would also like to thank the ModelTalker team for making it possible for her to synthesize her voice completely free of charge.